My drive to Back Channel Brewing was dark and winding with beautiful Christmas light displays along the way. The effect made my entrance into the taproom feel like I’d just arrived at the Gingerbread house in the woods (minus the evil child-eating witch part).

The taproom was dimly lit, but not in a Hollister (heaven forgive my blunder years) or dive bar way. Instead, it was cozy and inviting. The draping garland and Santa hat on the logo didn’t hurt either.

I settled in with an impressive flight (plus a handful of samples, thanks to the kind folks behind the bar). My lineup included:

Owner Josh Leddy, who was working behind the bar that evening, offered to take me on a tour of the brewhouse. The space is tight, but the expert setup makes it efficient and pretty darn cool. A cooler behind the bar houses brite tanks, to which tap lines are directly attached.

Leddy was also kind enough to offer me a bit of advice for the blog: “Always be tenacious. Even when you have a day off, just spend a few moments thinking about whatever you’re working towards. Those bits of 15 minutes add up.” 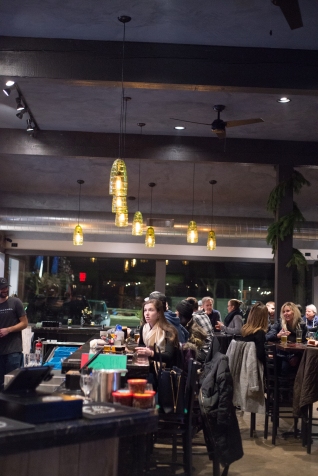